Dam/Age retrospectively follows Arundhati Roy's intellectual and human path of discovery of her need to become a dissenting voice. It explores her desire to become par t of the Save the Narmada Movement, which has been under siege for more than twenty years, under the menace of the well known kolossal hydroelectric project of the Narmada dams. Dam/Age also reconstructs the events leading to Roy (and e verything she represents) being sentenced by India's Supreme Court in April 2002. The film is also a very personal and public meditation by Roy, on her moral responsibilities and the possibilities which were placed upon her by her success as a writer. She is a citizen, an opinion leader, a witness to her time and to a countr y like India. "'The God of Small Things' became more and more successful and I watched as in the city I liv ed in the air became blacker, the cars became sleeker, the gates grew higher and the poor were being stuffed lik e lice into the crevices, and all the time my bank account b urgeoned. I began to feel as though every feeling in the 'The God of Small Things" had been traded in for a silver coin, and if I wasn't careful I would become a little silver figurine with a cold, silver heart."Well aware of her fame, Roy becomes a witness to the contradictions she sees growing around her, against the interests of po wer. She decides to use her skills as a writer to describe "how power shines the light, and what it chooses to illuminate and what it chooses to leave in the darkness." For Roy the stor y of the Narmada Valley is not just the stor y of modern India, but of today 's world : "who counts, who doesn't; what matter s, what doesn't; what counts as a cost, what counts only as collateral damage." In a clear and accessible manner, the film points to some urgent matter s, of political and not just environmental nature: from the consequences of globalisation, to unilateral plans "for development", to notions of representation, freedom of speech and human r ights in situations where the socio-economical gap is ever wider and contradicts any attempt towards progress. 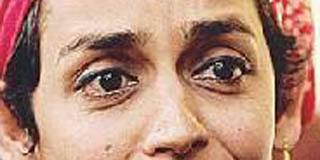