In its public debut the group Noname presents new imaginary visions created with sustainable projects. The works are as heterogeneous as are the backgrounds of the 14 artists. They share an awareness and a sense of responsibility toward our planet, life in its various aspects, and the tie between exploitation and appropriation of other people’s resources. Each artist shows his/her own point of view but speaks a language of shared values of humanity.

Cinzia Amanti evokes Western figurative tradition in a dramatic installation in which the anthropos at the center represents each of us, but the surrounding world is at its end, as Elisa Bagna reminds us in her unsettling work: Courbet’s scandalous painting, The Origin of the World, becomes a vision of death and the maternal body is a hybrid consisting of plastic and flesh. Beatrice Basso’s installation is light and evokes the movement of water and air, a comment on our involvement in respecting natural elements. Simona Da Palo’s work combines a TV set filled with plastic objects, the poetry of emotions expressed by their color, and the risk of falling prey to false truths. Delia Gianti’s magmatic canvas expresses the dark side of life but also the seeds of rebirth - lentils and rice kernels presented as precious jewels. In her poetic work, Bahar Heidarzade has us look at the world from the perspective of bees, which are indispensable for life but at risk of extinction. Annalisa Pascai and Allesandro Fara’s film celebrates the flow of life, the sharing between humans, water, earth, traditional myths and archetypes of origins. With the ironic title to her work, Elena Radovix stages a zoo-centric view of the world in which the female body is a hybrid of the elements of nature set in a silent space brimming with potential. Valentina Rotundo Serra’s garment evokes the magic of a fashion style that combines traditional techniques and natural fabrics. Livio Soffietti’s work on the mineral coltan treats a burning issue with apparent lightness: the exploitation and predation of places and people for our “blissful” well-being. In her masterful use of oil painting, Dede Varetto depicts a human being, victim and perpetrator, bearer of dreams and hopes, but also creator of violence and destruction, symbolized by the plastic veil covering and smothering it. Federica Verlato’s installation has blood red lines that connect us to the surrounding space, like a continuous flow of vital words. Andrea Zanninello uses recycled wood, live, singed material impressed with Greta’s face as a call to action.

In their live painting, Habit-at, the Wasp Crew (Edoardo Kucich amd Gabriele Guareschi) tell a story of human and nonhuman animals forced to cohabit an environment in continuous change because we exploit and destroy it.

Performance Legami intrinseci (conceived by Gianti): interwoven gold wires wrapped around the wrists to recreate vital ties between all the creatures present.

Performance Overdose plastica (conceived by the group Noname): unrecognizable creatures wrapped in plastic as a metaphor of today’s humans, increasingly individualistic and at risk of extinction.

Cinemambiente (Radovix), writing in moss on the façade of the Cinema Massimo

Wasp Crew every day from 17.00 to 20.00 during the Festival outside the Cinema Massimo 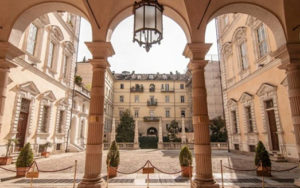 Guardians of the Earth