CinemAmbiente once again arrives in time to coincide with World Environment Day on 5 June, a global manifestation that promotes environmental initiatives. The Festival program is both vast and varied. This year’s jury president is famed Michael Cimino who will talk with Alberto Barbera about Sunchaser (1996).
The Festival presents one hundred films selected from the nearly thousand registrations received, a sign of green cinema’s vitality and growth as a distinct film genre. Two featured titles are South American: Lucy Walker’s Waste Land, that competed for Oscar Award, about artist Vik Muniz, filmed on location in a Brazilian dump site; and Icíar Bollaín’s Even the Rain about water privatization in Bolivia, with Gael Garcia Bernal in the leading role. Also featured are national premiers: Solartaxi - Around the World with the Sun, the journey of a young Swiss in a solar-powered car; Valentin Thurn’s Taste the Waste about food waste, with scenes of a dinner prepared from food leftovers for 1000 persons and held in Turin in 2010; the world premiere of Niccolò Bruna and Andrea Prandstraller’s Polvere - Il grande processo dell’amianto, which reveals new developments in the Eternit-asbestos controversy.
Closer to home are Gastinelli and Pellegrino’s A la vita! in cuneese dialect with subtitles in Italian and Guido Morandini’s La verifica instabile about a journey down the Po from Turin to Venice in an inflatable canoe and a folding bicycle. This being International Year of Forests, six films on forests will be shown, including the Italian premier of Yann Arthus-Bertrand’s Of Forests and Men, narrated by Paola Maugeri, who will be a jury member together with Michael Cimino and Mario Tozzi. Tozzi will present the Ital@ ambiente project created using citizen’s video content from the Web.
CinemAmbiente will also be a catalyst for other green events such as the second Bike Pride and the first FierAmbiente, a market of environmen- tally sustainable products.
In his novel, The Day of the Bomb, Austrian children’s book writer Karl Bruckner recounts the story of Sadako who survived the bombing of Hiroshima. During the final months of her life, she attempted to create 1000 paper origami cranes in belief of the legend that promises that the creator’s wish will be fulfilled on com- pletion of the cranes. In memory of the victims of the recent disasters in Japan, CinemAmbiente posters will display origami cranes, a symbol of long life and prompt healing. We therefore launch an appeal to make cranes in the hope that Japan will overcome this crisis and that Fukushima will not become another Chernobyl.

Ice and the Sky 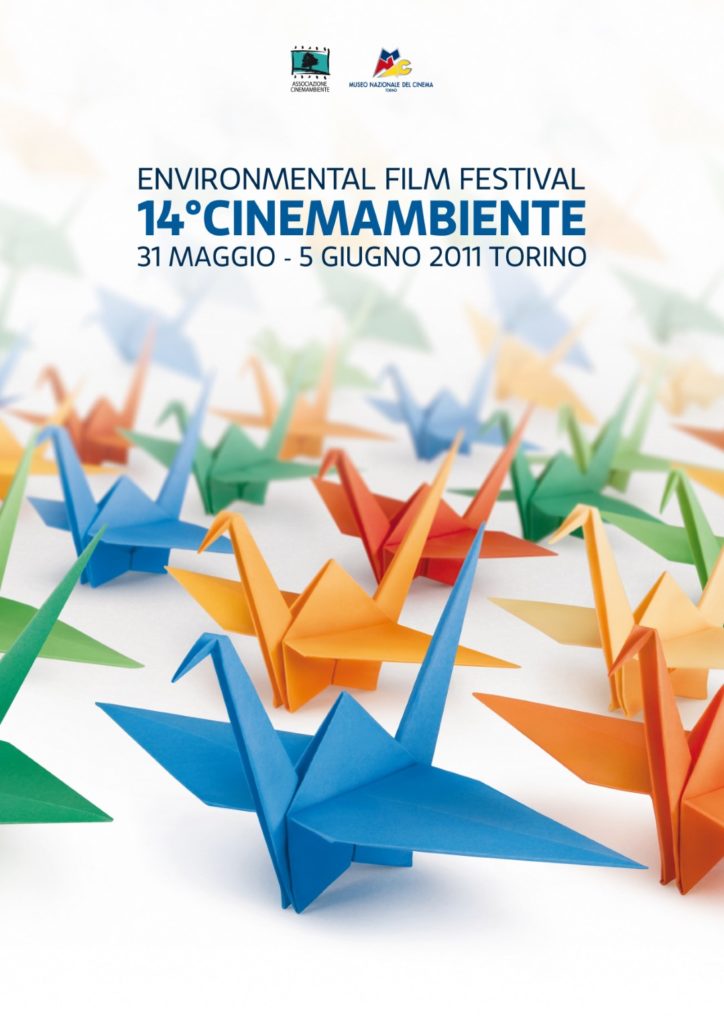